I apologise for those who like to read lots of posts each day, but the Internet in my hotel in Madonna di Campiglio might have worked well enough for Princess Sissi, when she used to hang out up there, but it is not really the latest in 21st century technology. Thus, I decided to have a more restful time and not write much, as there was really nothing to say. Luca di Montezemolo had a four-question chat with the UK press which was fine and not very exciting, although he surprised me when he said that the Ferrari chief designer was an Italian, as I have been under the impression for some years that Nick Tombazis was Greek. Still, Luca has many other things to worry about these days and so can be forgiven for not really much about the team. One day soon he may be Prime Minister of Italy and one cannot fault his charm…

The other “news” of the week was not very exciting, with speculation about why the new McLaren may be late, the news that Jean Alesi has joined Lotus (which proves that he still recognises the value of money), confirmation that Williams will have money from PDVSA (which was not really rocket science). There as also a story about some politicking in Korea which has removed Chung Young-Cho as the chief executive of the Korea Auto Valley Operation (KAVO). I have no idea why this happened as I thought that Chung did a very decent job in difficult circumstances. My feeling is that this must be a political move and if that is the case I fear for the event in the longer term because Chung is close to Bernie Ecclestone and some political replacement is not going to get the same kind of hearing as Chung enjoyed. Still, I guess that it is their money and they can do what they want with it. All I can do is hope that they find someone with an understanding of the world beyond Korea.

The Wrooom event ended last night with an entertaining race on the frozen lake (a big pond really) with the various riders and drivers mixing it on karts that sounded like big hoovers (and were slower than the average Dyson), and with Fiat 500s. This was all good fun and Fernando Alonso won both events, which meant very little as it was really just a publicity stunt. I was amused to see that Valentino Rosso was said to have qualified second, which was impossible given that I watched him on every lap and Felipe Massa gradually caught him and eventually passed him so must (logically) have been going quicker at all times. Still, the crowd loved it and that was what was important. Rossi is such a star that even Alonso and Massa were in his shadow all week.

Madonna is a nice little town and the Wrooom event has done wonders for it in the last 21 years, putting it only the international map. Good for them and good for Philip Morris and the other sponsors who are involved in this exceptional event. It really is a smart way to get a load of good publicity for your team at a time of year when the F1 news is thin of the ground. Red Bull has lots of money, but has not done anything similar, which is a shame because while we all know Mark Webber very well, Sebastian Vettel remains a bit of a mystery to most of the F1 media. He’s a thoroughly pleasant individual but he gives little away about his character and this is a shame because with a little more “paint” we could make much more of the success he has achieved. Still, Dietrich Mateschitz is supposed to be a genius at promotion and seems to be doing well enough, so who am I to question the way he goes about things?

Here are a few pictures of the week at Madonna. These include such delights as the special studded tyres used to help former Ferrari test driver Luca Badoer to drive the Ferrari F1 car on ice (which was a tough job, even with the specially-built Pirelli studded tyres), branded “sottozero”.

Hope you enjoy them: 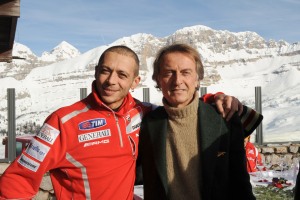 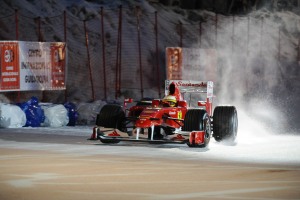 24 thoughts on “A week in the mountains”