There have been one or two comments to the blog since yesterday about politics intruding in the world of motor racing and that reminded me of an article I wrote for GrandPrix+ a couple of years back about the Grand Prix of Havana, when multiple World Champion Juan Manuel Fangio was kidnapped by guerillas led by Fidel Castro. It may sound unlikely, but it is a true story…

Fulgencio Batista became the strong man in Cuban politics after a coup d’etat in 1933. To begin with he stayed in the background, but by 1940 he had given up all pretence and become president. His regime was openly doing business with mobsters such as Lucky Luciano, Vito Genovese and the man credited with inventing money-laundering, Meyer Lansky, but the United States was happy to support him, as it meant that the government of Cuba was stable and, crucially, anti-communist. Batista was ousted in a free election in 1945 but returned to power in 1952 having masterminded another coup d’état. The one-party election that followed served only to increase opposition, although Cubans were wary of saying too much as there was a tendency for dissenters to be gunned down in the streets – or simply to disappear. Protests were dealt with using increasing violence and some of the basic freedoms laid down in the constitution were suspended and strict censorship was imposed on the media. As Batista’s rule became more and more brutal so more opposition emerged. A military coup was planned against him in 1956, but it was betrayed by one of its members and the officers involved were all jailed. Gradually the revolutionary 26th of July movement, headed by Fidel Castro, emerged as Batista’s chief opponent. For a time Castro had fled to Mexico in fear of his life, but late in 1956 he and a group of 82 supporters sailed for Cuba from the Mexican port of Tuxpan aboard a yacht called the Granma. Their aim was to start a revolution.

Batista was not too worried.

Havana was the fashionable place to be and with American money he felt comfortable enough to support the launch of a street race on the Malecon, a stretch of road that runs alongside the sea in the city. The government organised for some of the top racers of the day to visit – and paid them handsomely. Juan Manuel Fangio, the multiple World Champion, received $7000 (around $50,000 today) plus expenses for himself and three mechanics. The first Cuban Grand took place in February 1957 and Fangio had some serious opposition in Stirling Moss and Phil Hill, while Alfonso de Portago and Harry Schell also raced.

The spectators included Hollywood star Gary Cooper, while de Portago brought along his girlfriend, actress Linda Christian, who had only recently split up with thespian husband Tyrone Power. There was huge local interest in the event, not least because of a lottery offering the first prize of a Cadillac and a ticket to visit Monza for the Italian Grand Prix.

“Racing along the waterfront on the Malecon in the vibrant city of Havana was a remarkable experience,” said Moss. “The atmosphere was incredible and the competition intense and the hospitality beyond words. The fans loved it.”

The main race featured drivers from 11 different countries and it turned out to be a duel between Fangio and de Portago, with the veteran finally beating the Spanish aristocrat after appearing to make a race of it. The first Grand Prix was such a success that plans were soon drawn up to repeat the exercise in 1958.

The atmosphere, however, had changed dramatically by then. Castro’s revolution was gathering strength and repression had increased. The glitter of Havana was just a thin veneer. When Faustino Perez, who led Castro’s clandestine operations, heard that Fangio was returning to Cuba he decided that it would be a good idea to draw attention to the rebellion by kidnapping the star attraction – and making sure he did not take part in the race. Perez contacted Oscar Lucero Moya, who was in command of covert activities in Havana, and they began to make plans to kidnap Fangio. 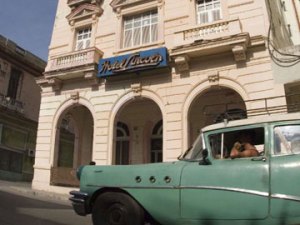 Fangio arrived in Havana on Friday February 21 and spent the next day preparing for the race, and patiently attending Batista’s official functions. On the night of Sunday February 23 Lucero and his team of nine kidnappers (which included his wife) made their move. They had discovered from a journalist that Fangio was staying at the Hotel Lincoln (right), in old Havana. That evening the bar was busy with racegoers and international visitors. Just before nine Fangio emerged from the lift and joined his friends Alejandro de Tomaso (the Argentine racer who would soon start his own automobile company in Italy), Nello Ugolini, mechanic Guarino Bertochi, manager Marcelo Giambertone and advertising man Carlos Gonzalez in the foyer.

“We were having a conversation when suddenly a person in a leather jacket approached us,” Fangio remembered. “He had an automatic pistol in his hand and told us all in a firm and decisive voice that we should not move or he would kill us all.”

The man was Lucero and several of his accomplices were also in the lobby. At first Fangio thought it was a joke but when de Tomaso made a move to stop the kidnapper, he realised that it was serious and asked the man where he was going to be taken. Lucero assured him that nothing bad would happen and Fangio then walked with the kidnapper to a black Plymouth that was waiting at the street corner. His exit was covered by Lucero’s co-conspirators.

“I found out later that there were three cars involved,” Fangio said. “They drove slowly through the streets so as not to attract attention. The people who I was travelling with me apologised for what they were doing and said that all they wanted to do was to draw the world’s attention to their cause.” 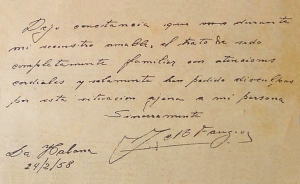 Fangio was taken to a safe house and later moved on to another. He wrote a note (left) to show he was still alive. He was fed and made as comfortable as he would have been in the hotel.

The kidnappers made the most of their move and quickly informed the news agencies and radio stations that they had taken Fangio captive. Batista’s security forces were embarrassed and mounted a major operation in an effort to try to find the Argentinian and apprehend the kidnappers. Witnesses to the crime spent hours looking at books of suspects, trying to identify those responsible, and many known sympathisers were questioned. The airports were monitored to try to ensure that Fangio was not whisked out of Cuba. 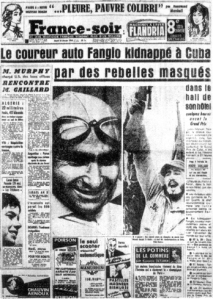 The kidnapping caused a sensation around the world, although not all of the publicity was favourable. Writing in the Miami News American journalist Morris McLemore was very critical.

“It is a mighty poor revolution that has to strike a blow for liberty by kidnapping a foreigner who does not know beans for buttons about what is going on,” he wrote. “Walking up to a man of goodwill, who couldn’t possibly expect anyone to wish him harm in Cuba and sticking a gun in his ribs takes as much guts as slapping a baby with a monkey wrench.”

Batista’s goons were unable to find any trace of Fangio. On the Monday morning the decision was taken for the race to go on without him. That morning Perez arrived at in Havana and talked to Fangio about the revolution. He had been with Castro on the Granma and was close to the leader. He apologised for their actions, but explained that Fangio would be freed as soon as the race was completed. The World Champion spent the day killing time. He declined the chance to listen to the event on a radio that the kidnappers produced for him.

Down on the Malecon, security had been increased but this did not stop the fans from coming. There were probably twice as many as there had been the previous year and there was little room to move. The planned two o’clock start came and went as Batista’s men continued to try to locate Fangio. Finally, 90 minutes behind schedule, Maurice Trintignant took over Fangio’s car and the race began. Masten Gregory went into the lead, although Moss soon took command. On the seventh lap the Cuban driver Armando Garcia Cifuentes lost control of his 2-litre Ferrari on a curve by the American Embassy and ploughed into the crowd that had gathered in a small park. It was fortunate that the car ran into a crane that had been parked at the scene, but there were seven people killed and around 40 injured as they scrambled to avoid the car. The race was stopped and Moss was declared the winner.

In their hideout the rebels were worrying about other matters. They feared trickery if they dealt directly with Batista’s men, worrying that they would all be killed and the rebels blamed for Fangio’s demise. In the end he suggested that they contact the Argentine Embassy and, after negotiations with Ambassador Raul Lynch, a plan was agreed. Fangio would be dropped off close to the ambassador’s residence and would thus be safe from his Cuban hosts. This also gave the kidnappers the opportunity to get away without being followed. At close to midnight, the World Champion was duly released, two blocks from Lynch’s house. Arnold Rodriguez, who was in charge of this operation, told him that when the revolution was successful he would be invited back to Cuba by the new government – as a guest of honour.

“They left me with a letter to the government of Argentina excusing themselves for having used me for political purposes,” Fangio said.

Later he would tell the media (right) that he had been treated with great care and civility and said that he bore no ill will towards the rebels. They in turn announced that Fangio was a man of great charm and dignity.

“It was one more adventure,” Fangio said. “If what the rebels did was in a good cause, then I, as an Argentine, accept it.”

Such was the scale of the coverage of the kidnapping that Fangio was soon in New York, where he was paid $1000 to appear on the Ed Sullivan television show. He remarked that it was ironic that it had taken a kidnapping to achieve his appearance, something that five World Championships had not merited!

There was, however, a dark side to the story. Two months after the kidnapping Lucero was denounced by a traitor in his organisation and was arrested by Batista’s secret police. He was tortured for several weeks for information about his network and then executed. It was another seven months before Batista fled the country and the rebels took power. In the cells at the Bureau of Anti-Communist Activities a message was found scrawled on the wall, saying “May 19. Still alive. Oscar”. Today Lucero is a hero of the Cuban revolution with a university named in his honour.

Racing did return to Cuba in 1960 for an event known as the Freedom Grand Prix but this was held on a military base outside Havana and did not attract a large crowd. After that the Cold War intervened and Cuba became isolated from the Free World. The racing stopped. Today, in front of the Lincoln Hotel, there is a bronze plaque describing the events of 1958 and noting that it was “an important stimulus for the revolutionary forces“.

Castro did invite Fangio to return but it was not until 1981 that he went back to Havana in order to sign a deal to supply Mercedes-Benz trucks to Castro’s government. Perez was by then a government minister and welcomed him warmly, and even Castro interrupted an important meeting to greet the man he had ordered kidnapped.

On Fangio’s 80th birthday there were messages from all over the world for the great man, including one from “Your friends, the kidnappers”.

28 thoughts on “When politics and racing collide…”