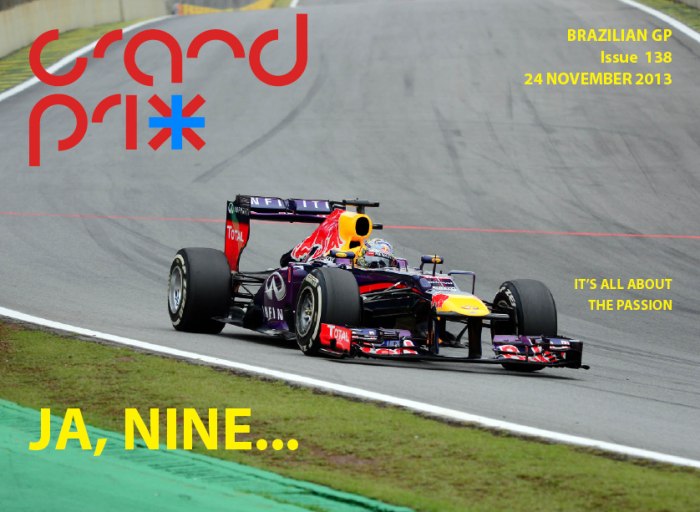 Sebastian Vettel equalled Alberto Ascari’s record on consecutive victories in Formula 1, with his ninth win in a row at Interlagos. It was not without drama and tension but Vettel seemed to be in control throughout. Mark Webber finished a popular second in his last F1 race, while Fernando Alonso gave the red team’s fans something to cheer about after a pretty miserable season.

The Grand Prix+ team was in Brazil to take you to the heart of the action. We are a bunch of professional F1 media menw ho have been chasing F1 cars around the world for the last quarter of a century. We have real access to the top people in the sport, which means that we can offer almost unique insights into what is going on. We believe in old style reporting, making sure that F1 fans know all of the details about what happened, both in qualifying and in the race. This creates a proper record of each F1 race that you can store in your own computer or tablet.

In this week’s issue:

We all look back at Mark Webber’s career and how we have enjoyed working with him.
We interview Daniil Kvyat, Red Bull’s new rising star
We ask Christian Horner if he is really going to take over from Bernie
We take a look back the GP3 season
We look at the fitness required to be an F1 driver
And we remember the Martini F1 team
DT enthuses about Interlagos and JS suggests that we should all go racing in the West Indies…

For more information, go to http://www.grandprixplus.com.

15 thoughts on “Three hours after the race…”