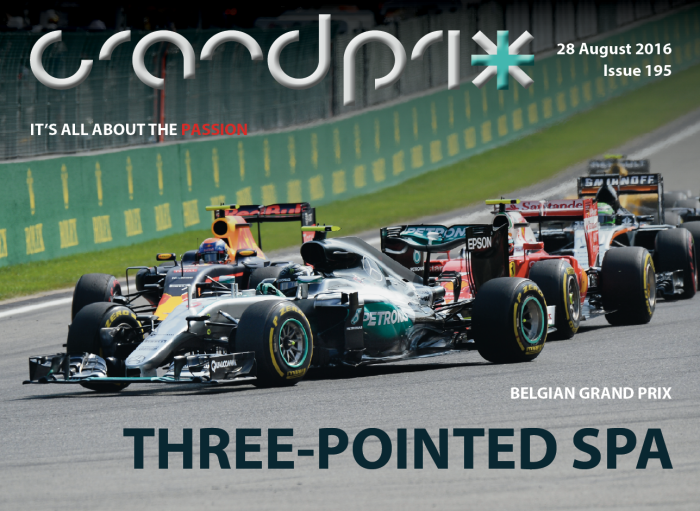 Once we knew that Lewis Hamilton would be taking a series of engine penalties at the Belgian Grand Prix, we knew that the chances were that Nico Rosberg was going to win the race, even if Max Verstappen had the Mercedes boys worried with his pace in qualifying. Max was second on the grid and the estimated 50,000 Dutch fans who flocked to Spa, clogging the roads on Sunday morning, were desperate to see their hero do well. Alas, it was not to be. At the first corner Sebastian Vettel made a fairly a wild move, slicing across when he had no real right to do so. The result was that he ran into his own team-mate Kimi Raikkonen, who then hit Verstappen, who was on the inside and in the right place to make the corner his own. Nico must have chuckled into his helmet if he was watching his mirrors as his primary rivals tumbled over one another. Nico was four seconds clear of Nico Hulkenberg at the end of the first lap with Daniel Ricciardo third. There was a Virtual Safety Car on lap 3 after Carlos Sainz suffered a puncture and then on the fifth lap Kevin Magnussen dropped it in his Renault in Eau Rouge. It was a huge crash and after several laps of Safety Car, during which many of the cars pitted to get themselves on to better tyres, the red flag was shown, as the barriers need to be repaired. It took 17 minutes before the mess was cleared up and then the race was on again with Rosberg being chased by Ricciardo, who had snuck ahead of Hulkenberg in the rush into the pits. By that point Lewis Hamilton had driven from the back of the field to fifth place, with Fernando Alonso, who had started with him at the back ahead on the road, the two having started on harder tyres. When the race got going again. Lewis overtook Fernando and then Hulkenberg to rise to third, but there was not much more that he could do after that. Still, a third place finish from the back row of the grid was a great job, with a little help from the Safety Car. Rosberg was able to control the rest of the race, but was gracious in victory admitting that it had not been a difficult day and congratulating Lewis on his performance. Dan Ricciardo was second but never really challenged Nico, while Max and the Ferraris spent the afternoon trying to make up for lost ground, falling over one another as they jousted. There was a lot of whining noises from the Ferrari cockpits… It was a big day for Force India, which picked up a bunch of points and overtook Williams to take fourth in the Constructors’, while McLaren jumped ahead of Toro Rosso thanks to Fernando Alonso’s solid seventh, further evidence that McLaren is starting to get there… Vettel finished sixth and overtook Raikkonen in the Drivers’ World Championship, while Kimi was ninth and Verstappen a miserable 11th, despite some hard driving.

Also in GP+ this week…

– The silly season in F1
– We remember Chris Amon
– We look at the Belgian GP of 1966, a race that changed F1 forever
– JS explains why he loves Spa
– DT reflects on a painful August
– The Hack recalls the lucky Mr Amon
– Plus the usual fabulous photography from Peter and his team of snappers

GP+ is the fastest F1 magazine. It comes out before some of the teams have even managed to get a press release out. It is an e-magazine that you can download and keep on your own devices and it works on computers, tablets and even smartphones. And it’s a magazine written by real F1 journalists not virtual wannabes… Our team have attended more than 2,000 Grands Prix between us.

GP+ is an amazing bargain – and it is designed to be, so that fans will sign up and share the passion that we have for the sport. We don’t want to exploit you, we want you to join the fun. You get 23 issues for £32.99, covering the entire 2016 Formula 1 season.

For more information, go to www.grandprixplus.com.

146 thoughts on “Five hours 30 minutes after the race”